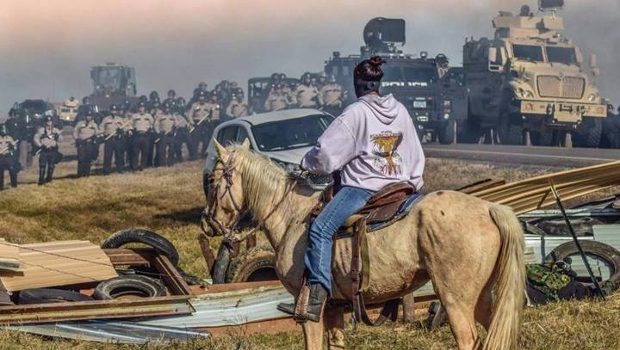 “It ’s time for real patriots … it’s time for anyone and everyone to lead,” reads a note on Go Fund Me from Veterans Stand for Standing Rock.

The struggle for and against the Dakota Access Pipeline has turned violent, but supports from veterans are in route to greatly help protect those protesting for Standing Rock.

On December 4, a large number of veterans will deploy in North Dakota to help protestors in fighting to preserve the sacred Native American land within the Veterans Stand for Standing Rock effort.

The mission will be to gather as a peaceful, unarmed militia and protect the water protections from bullying and assault in the hands of the militarized police force and DAPL security, in addition to support the cause and bring on additional national interest that is much appreciated.

The occasion is supported financially by a GoFundMe campaign which has increased in 17 days $580,254 of its $750,000 aim (as of press time). The funds go toward supplies, transport, and food for the veterans that will attend.

For many of the veterans, their journey to Standing Rock is one of honor, bravery and devotion.

While protestors are defending the Native Americans, proponents of the building say it is going to reduce U.S. reliance on foreign petroleum exceptionally.

The occasion page on Facebook encourages attendees to bring earplugs, gas masks, body armor and firing mufflers and leave the substances, booze, and weapons in the home.

“In the ultimate expression of alliance, we are there to put our bodies on the line, no matter the physical cost, in complete nonviolence to provide a clear representation to all Americans of where evil resides,” the Operation Order for the event reads on the Facebook of Wesley Clark Jr., a fellow veteran and a screenwriter/activist who co-founded the event. “The water protectors are leading the way against this same evil which we must all face globally, saving ourselves and our children from the apocalyptic outcome of climate change.”